Since 1996, RICHARD CHALLONER THEATRE COMPANY have been annual visitors to the Kolibri Theatre and last appeared in A Christmas Carol in February 2019. They are based at Richard Challoner High School in West London and have previously performed Sherlock Holmes (2015), Oliver Twist (2015),  Robin Hood (2016),  ‘Will’ – Shakespeare and Juliet (2017) and Frankenstein (2018) at the Kolibri Theatre.

‘He was like a giant, broken into pieces and badly reassembled.’

In the high towers of Notre Dame Cathedral lives Quasimodo, the hunchback bell ringer. Mocked and shunned by everyone because of his horrific appearance, he is pitied only by the beautiful gypsy girl Esmeralda, who loves the handsome Captain Phoebus. Dom Claude Frollo, Quasimodo’s evil master, plans to destroy Esmeralda and only the Hunchback can save her as the people of Paris storm the Cathedral…

Due to the retirement of Neil Zoladkiewicz, The Hunchback of Notre Dame will be the Company’s farewell performance at the Kolibri Theatre. 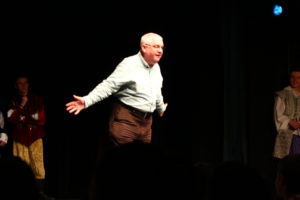 for a wonderful friendship and cooperation!