The Tragedy of Man

The author, Imre Madách, was born on January 21, 1823.  Madách wrote his main work, The Tragedy of Man, in 1859-1860. Since then, it has already been translated into almost all European languages. It was first published in 1861. The play is considered to be one of the major works of Hungarian literature and is one of the most often staged Hungarian plays today. Its’ interpretation became a cornerstone of the history of Hungarian literature and theatre.

The main characters are Adam, Eve, and Lucifer. As God creates the universe, Lucifer decries it as futile, stating that man will soon aspire to be gods and demanding their own right of the world, because God was forced to create with them, „the ancient spirit of denial“. God casts him out of Heaven, but grants his wish: the two cursed trees in Eden, the Tree of Knowledge and the Tree of Immortality. Playing on Eve’s vanity and Adam’s pride, Lucifer tempts both into sin. After the Fall and expulsion from Eden, Adam is still too proud to admit that he acted wrongly. Instead, he recounts his dreams of human progress and achievement; he feels that now, unencumbered by God’s rules, he is ready to pursue his own glory. Lucifer puts Adam to sleep, and the two begin to travel through history.

PlayOn! inspired us to take out this classic drama and find innovations in form and content that would open the door to a broader, contemporary interpretation. We will offer several occasions of interactivity for our audience.

Our goal is to re-interpret the work by using gaming elements, and so to create a fresh, comprehensible youth production that young people acknowledge.

Created within the framework of PlayOn! international project co-funded by the Creative Europe Progamme of the EU. 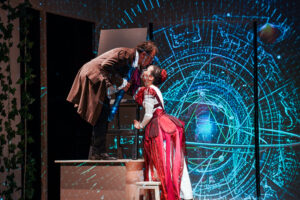