The Dream of the Young Chinese Emperor

1. PROLOGUE
The well-known Hungarian writer of the 19th century, Mór Jókai (1825-1904) starts writing a tale about a Chinese theme. Taklamakan, a golden ferret from China shows up and declares that the tale actually belongs to him. The writer asks him to tell the tale. So, the story about a young Chinese emperor and a princess begins.

2. DREAM
The fifteen-year-old Emperor of China, Chia Ching and the Princess of Leaotung, Liu-Liu (also 15) have never met in their lives, but in their dreams they fall in love with one another.

3. THE LAW
Chinese law has it that before his coronation Chia Ching has to get married; and accordingly, Liu-Liu has to take a husband before she is crowned Princess of Leaotung.

4. THRONE ROOM OF THE EMPEROR
Chia Ching tells his mother and the scholarly mandarins that he will not take a wife from the young women that they had offered to him; instead he will marry the girl he saw in his dream. For his disobedience, he is banished to confinement so that he can give it a second thought and change his mind.

5. THRONE ROOM OF THE PRINCE
Liu-Liu tells her father and the wise women that she will not take a husband from the young men that they had offered to her. For her disobedience, she is banished to confinement so that she changes her mind.

6. CONFINEMENT
The young emperor and the princess keep thinking about each other in the confinement of their rooms.

7. YES
Chia Ching agrees to his mother’s request and is willing to meet the most beautiful girls of China in the temple of Goddess Nioma. The sixteen arms of the goddess symbolize the sixteen provinces of China. She holds in her fifteen hands objects which are characteristic of each respective province; however, her sixteenth hand is empty. There were no news of the province of Leaotung in the last 100 years, and no candidate for bride was sent from there either.

8. SHADOW PLAY: DANCE OF THE YOUNG WOMEN
Though unwillingly, Chia Ching ends up looking at the dance of the fifteen girls, hoping that the one he fell in love with in his dream will be among them. But the girl does not appear. The young emperor sends for the ancient statue which represents the onetime beauty of Leaotung. In the statue, he recognizes the girl in his dream. He wants to travel to Leaotung without delay. The scholarly mandarins have no idea where the distant province lies. Only the wisest scholar, Jeo Hui might know the answer.

9. IN THE OBSERVATORY
The old wise man in the observatory knows a lot of things about Leaotung but he does not know how to get there, since no one had visited the province for 100 years. Chia Ching decides to find the oldest peasant of the country, perhaps he would know the way to Leaotung. His mother and the mandarins do not allow him to talk with a peasant.

10. SHADOW PLAY: DANCE OF YOUNG MEN
The most attractive young men of Leaotung dance in front of Liu-Liu. The Princess is immensely depressed because her lover she saw in her dream is not among the dancers. She asks her father what to do to shake off her sorrow. Mey Ling is the knower of the secrets of Leaotung, but Liu-Liu cannot go and see her as she is not supposed to leave the palace on her own.

11. IN DISGUISE
The young emperor and the princess both put on disguise.

12. LUZU
The 110-year-old saint lives alone on top of a mountain. He reveals to Chia Ching that Leaotung had been cut off from the rest of the empire by an earthquake 100 years ago, and no one but his golden ferret knows the way to the isolated province.

13. MEY LING
Mey Ling, the knower of the secrets of Leaotung lives alone in a cave. Upon her visit, Liu-Liu learns from her that the Goddess Nioma had hit the province of Leaotung with an earthquake and thus closed it off from the outer world so that its people can live in undisturbed peace, never to set foot outside the province. Liu-Liu falls into even deeper sadness.

14. THE EMPEROR’S PALACE
Chia Ching introduces Taklamakan, the golden ferret to his mother and the mandarins. He commissions a collar for the ferret, with a written message calling on the leaders of Leaotung to bring the most beautiful young woman of the province to Beijing. Chia Ching also orders that his portraits should be flown towards the distant province by hundreds of balloons so that the girl of his dreams might get to see it.

15. IN LEAOTUNG
The Princess asks her father’s permission for her portraits to be flown by hundreds of arrows across the high mountains and transported by hundreds of ships through the seas so that one of them might reach the boy she saw in her dreams. He would recognize her portrait and come for her – and then she would no longer be depressed.

16. BALLOONS, ARROWS, SHIPS
China becomes filled with the two portraits. The young emperor and the princess each recognize the portrait of his/her lover. It’s her! It’s him! However, they do not know who the other one really is – moreover, they are only supposed to marry someone of the same rank. Liu-Liu’s sorrow does not fade away, and Chia Ching is unhappy, too. When can they have each other?

1. ON THE WAY
The indefatigable Chia Ching sends a delegation to follow the golden ferret to Leaotung. The mandarins get exhausted on the way. A Roadrunner arrives to inform them that the only pass leading to Leaotung is so narrow that no one else but the golden ferret is able to get through it. The Roadrunner wants to know whether they should try to cave the strait wider so that the delegation can pass through. The mandarins say yes.

2. IN LEAOTUNG
Taklamakan arrives in Leaotung. For some mysterious reason he looks huge among the locals. The people of Leaotung are scared of him, Liu-Liu is the only one who is not afraid. She notices the message glittering on the collar of the golden ferret. She reads the writing and realizes that the young man she fell in love with in her dream is the Emperor of China himself! In her merriment, she falls down in a faint and she does not wake up. Her father asks advice from the wise Mey Ling. Mey Ling thinks that only her lover’s kiss can wake up the girl. The Prince calls on the Roadrunner to deliver a message engraved in a piece of diamond to the Emperor in Beijing.

3. IN THE EMPEROR’S PALACE
The Roadrunner delivers the diamond to Chia Ching but the stone is so tiny as a speck of dust.

4. OBSERVATORY
Chia Ching asks the astronomer to enlarge the writing on the diamond with his telescope. He reads the message: Liu-Liu is on her way to Beijing!

5. ON THE WAY
The delegation from Leaotung proceeds in a long row, carrying the unconscious Princess in a litter. Their journey is accompanied by ominous signs, and the women of Leaotung are reluctant to continue on the forbidden road. They fear that some big trouble awaits them if they cross the borders of the province. However, Liu-Liu’s father is unswerving: the procession must go on.
From the other direction, the Emperor’s reception committee arrives to meet the delegation of Leaotung in the middle of the bridge. And with this comes the realization: the people of Leaotung are but six inches tall. Chia Ching believes them to be masterful puppets. As a play, he kisses the puppet representing Liu-Liu. She wakes up and says: “I am Liu-Liu.”
The secret is revealed. Mey Ling explains that 100 years ago a severe famine struck the province of Leaotung. The goddess Nioma, to help the people of Leaotung survive, transformed them into tiny midgets in one night, and with an earthquake she cut off all access to the province. The only witness to the miracle was the 110-year old Mey-Ling, who kept the secret till this day.
The tiny Liu-Liu is sitting on her lover’s enormous palm. Their parents were right: they can never have each other. Dreams and reality are two different things.

6. FINALE
Everyone returns to their own homes, carrying in their hearts the memory of this miraculous meeting. Chia Ching will never take a wife, and Liu-Liu will not marry either; however, their dream makes them happy for a lifetime. The writer finishes the tale of the golden ferret.

script and lyrics written by:

Assistant to the director: Andrea Hajsz 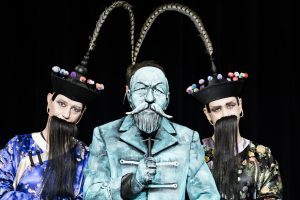