Music and play based on the poems of Sándor Weöres

Bóbita lost her poem and would like to get back to her home. If you are going to be a clever butterfly, a mushroom and a small fish, you can help her to find her way.

The play is based on the poems of Sándor Weöres, one of most important lyric poets in 20th-century Hungarian literature.

Created in the framework of Small Size Performing Arts for Early Years – founded by the Creative Europe Programme of the European Union. 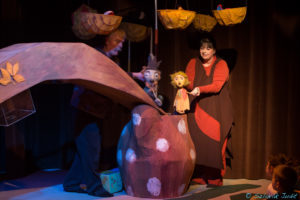